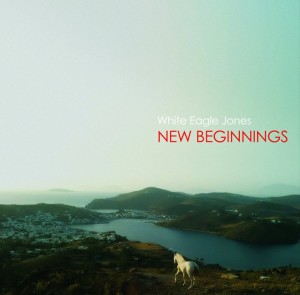 After more than 30 years as a musician, producer, musical catalyst and influencer in the Dutch music scene, Hanyo van Oosterom has made his first solo album.

Influenced by some of the 20th century’s great singers and songwriters, including Tim Hardin, Skip James, Ben Harper, Neil Young, Van Morrison, Nina Simone and Al Green, Hanyo has made his first ever recording with his voice as lead vocal and his acoustic guitar as lead instrument.

The basic tracks were recorded on the Greek island of Patmos, A place of elemental power, where St John wrote his Revelations. In a near hidden cave, Hanyo underwent an artistic transformation. The rock of Killikatsou was the catalyst for the birth of White Eagle Jones. Hanyo says: ” It’s actually because I go to Patmos so often and it’s not easy to take a drum kit or piano, so the guitar became my instrument of expression here, and over the last three years it has catalysed a musical reinvention . It’s been an exciting process, which I’d recommend to any artist”

Hanyo’s new album is a radical departure from his previous ventures in trip hop, jazz, rock, soul and funk. During his career, Hanyo has worked and performed with artists like Rick Devito, Omar Ka and Colonel Red. As the musical director of the Numoonlab Orchestra he has worked with artists like Ursula Rucker, Tony Allen, Dwight Trible, Jon Hassell and Anthony Joseph.

‘New Beginnings’ is the debut of Hanyo van Oosterom as singer/songwriter White Eagle Jones. The ‘Jones’ is a reference to The Jones, the cult late 70s band whose leader and drummer was Hanyo aka Mr. Jones. The ‘White Eagle’ refers to his ambient and minimal works.

The basic voice and guitar tracks for ‘New Beginnings were recorded over 3 years, during visits to Patmos. Back in Rotterdam, the Dutch soundscape master applied his touch of production genius. This time no effects and electronics, just natural acoustics and oldschool vintage instruments.

As a masterchef in his own kitchen Hanyo took personal care over all the ingredients: a solid foundation of (Hummingbird and Gretsch) guitars, strengthened by basic drums and bass. All one take and real time recordings like in the old days.

The weathered voice of White Eagle Jones can fly at the sounds of the Hammond and the touch of the Wurlitzer and classic grand piano. Sometimes the broken vocals sound like Neil Young meets Johnny Cash. Hanyo: “Got no cash i’m afraid but i’m waiting for the harvest”.

‘New Beginnings’ is an epic album, full of hard and humble craftsmanship. Above all it’s a personal statement of an anonymous songwriter searching for truth and peace.

Poet Anthony Joseph on ‘New Beginnings’: “I dont know why but these songs really get to me, they are like a breath of fresh air, like a drink of water. It always sounds like just what I need to hear at the time. My album of 2011, without question”.

‘New Beginnings’ is available on vinyl (including CD) as a limited edition for collectors, released by Numoonlab Recordings, Hanyo’s label and ongoing international improvisation project.

Below are 3 songs from ‘New Beginnings’:

Click here for a short preview of ‘New Beginnings’ on SoundCloud

Below, Hanyo talks about his life in the cave: